Today I met Janet and Mike in one of the million Starbucks around Phoenix. I was at the wrong Starbucks for my meeting, but when you're in a coffee shop, how can you not stop and have a 'coffee' with someone?

I named this blog/book correctly because I am now a pro at coffee shops.  Except I may not be at the RIGHT coffee shop. Minor detail.

Janet looked like the lady I was supposed to meet. I asked her if she was Judy. She said no and asked me if I was Kaitlyn. No again. I said if our people didn't show up we should just take their place. She thought it an excellent idea.

"What are you here for?" I asked her. She had a real estate meeting.

She introduced me to Mike next to her. We realized it was VERY easy to get to know people when you think you are supposed to meet them and that calling people by the wrong name is a great trick to making friends in a new city.

I didn't think the coffees would come in a new city, but apparently this is the way to go.

They liked the idea of meeting people this way so much, Janet said it could make a great commercial for their industry. She gave me her card and took my name (my REAL name) and said she would call me.
Posted by Julie on an adventure at 2:50 PM No comments:

Email ThisBlogThis!Share to TwitterShare to FacebookShare to Pinterest
Labels: 87 Coffees, let's make a commercial, Strangers in a coffee shop 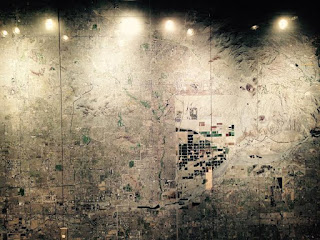 Today at the Arizona Science Center, I saw a giant map of Phoenix. This was helpful because everyone keeps telling me I am in the easiest city to navigate but I could still do well to have a map like that.

Curiously, a woman pointed out her house. As in, her exact house on the biggest map I've ever seen which as far as I could see didn't locate things like particular houses.

It made me realize that we all see differently, even if we are staring at the same thing.

I'm learning but right now am happy if I choose the correct location somewhere in a 5 mile radius on the map.

Side note: when I give directions, I typically use landmarks. Phoenix doesn't work quite like that. 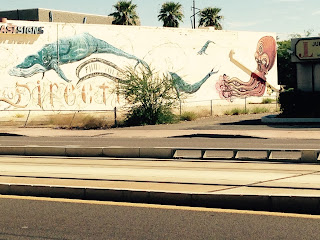 I am not sure what constitutes a coffee experience anymore. I probably need to have more interaction with some of these people I meet. But I am learning a lot from them.

Good news: I think I have been to every coffee shop within my five mile radius. So, there's that.

The city is growing on me and I am sure I am growing being in the middle of newness. I probably overuse that word so I will choose another word.

It is sweet being here, and it's been easy to celebrate. Life still feels a little limbo-y, but I'm realizing that's okay.

None of us have it all figured out along the way.

Change is so weird, but I think it is necessary. Since I didn't have a lot of words about this season and change, I am grateful Emily did.

Here's to change and even if it sounds backwards, finding little ways to celebrate it along the way.. aka I will accept any wall map you want to send my way as long as you can find your house on it.

linking with kate
Posted by Julie on an adventure at 8:52 PM 4 comments:

There are Trees in Arizona

The palm tree only gets stronger by the blowing winds because it digs its roots deeper. I don't worry about the palm tree outside my window falling down for good when the weather changes drastically. It might have moments where it topples a little but as it digs its roots down deep, it straightens up again and is even stronger.

It's easy for me to be light and airy during most of my writing on here, especially because I am interviewing other people and talking about adventures, but I still need some moments to remember things like what the palm tree teaches.

It reminds me to dig my roots down in Christ who strengths me and anchors me because otherwise it's too easy to topple around everywhere. Life is so strange and cool and funny and sometimes words don't explain it but I am so grateful for all His grace in this new season! A fun city to explore. My fave coffee who makes life sweeter. Trees. New faces. Train rides. Mountains. Reminders of people in my life all over who are still there. Lots of adventures already!

Update on Timbler: he is safe and sound and rode the train for the fun of it this afternoon. He hardly wanted his picture taken. Don't tell him he's been the feature story in the blog today.. 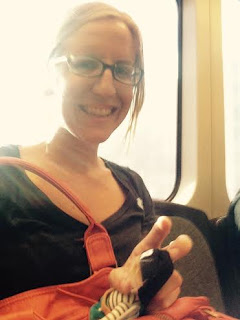 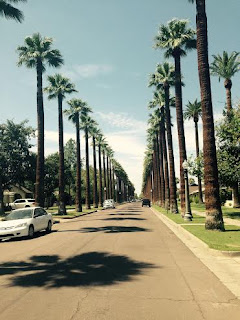 Maybe they aren't the same trees, but there are still trees in Arizona.
Linking with kate for a very delayed post!

Posted by Julie on an adventure at 5:47 PM No comments:

I am learning my way around and have been enjoying traveling around the city of blue skies and sunny days. It's been the rainy season here so I encountered my first Arizona storm last night. I was about to take a walk when the weather changed in the matter of seconds. In the morning, all was well again and it was as if nothing ever happened. Onward, we go.

Before I left North Carolina, my friend Amy and I decided to purchase a traveling friend who would belong to both of us, and split his time between Phoenix and Raleigh. We found the tiniest of traveling creatures and named him Timbler. We knew he was just right for the job. 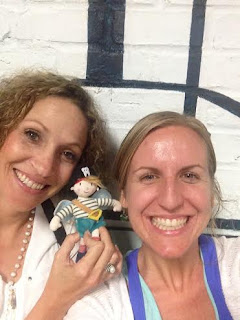 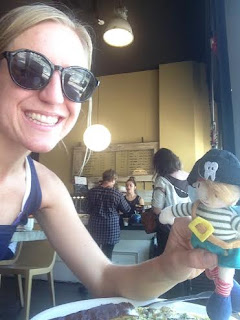 He made the long journey and then he made his first stop in the desert at Lola's to eat some breakfast. Yum.
﻿ 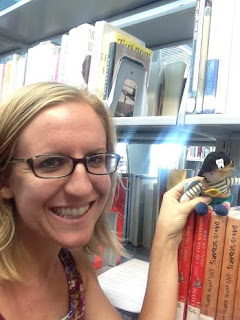 The library was fun but big! He liked riding the elevator. He decided to go easy on the reading for awhile and just keep seeing the sights.
Where will Timbler be next?
He was in my car the last time I checked, but now he's not there. You can't be lost when you're on an adventure, but hopefully, he didn't try to escape during the storm last night.
I will keep you posted. He is such a traveler, I am sure he will have many stories to tell us. Perhaps over coffee.
﻿
﻿
Posted by Julie on an adventure at 1:17 PM No comments:

A week ago today I moved to a new land.

What do you do when you're anonymous in a new place?

You get out and see the world, that is all you can do.

I promise there are more pictures, friends, but true to my life, I am out now, at a coffee shop no less, and my phone has died once again. 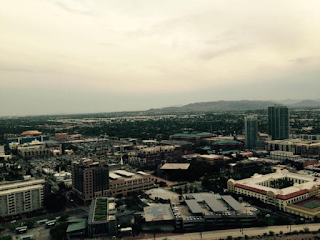 I have had a couple distinct coffee encounters so far in Phoenix (I will write about them in a few minutes, I promise), but for the most part I've only been able to take in all that is happening around me before actually engaging in it too much. I have always been one of those people who has to understand a little before moving toward.

I want to engage this storied city, but everywhere, things are different. Truth: I need to understand this place a little more but the stories are still here, still coming. They are coming in bits and fragments, and I don't understand how they fit together yet. But that's okay.

The group next to me only further confirm and inspire in me the idea that I may have landed in the desert, but this place is flowing with creativity, diversity and art. They seem to be writers, maybe screenwriters. I am trying not to eavesdrop too much on them but I keep hearing about skits involving clown strippers and puppets on trial..Who are all these people???

It's amazing to be somewhere new, not just for the point of a short travel where time moves quickly and you still see from a distance, but with eyes up close and when foreign meets familiar. It's starting to happen but slowly, or maybe quicker than I imagined.

How much do we forget that we are creatures of habit? What of life when we lay open to what a day brings us? What a place and its people bring us? And when we CAN'T be in control because everything, everything is new?

There, perhaps, is a blessing in disguise.

Posted by Julie on an adventure at 4:18 PM No comments: