A name with a face (airport tour guide)

My new favorite airport is Detroit airport. I never thought I'd have a favorite airport. Until I met a tram attendant who directed me toward concourse D and he proceeded to tell me all about where I needed to go plus did I know there was a light tunnel in the airport? 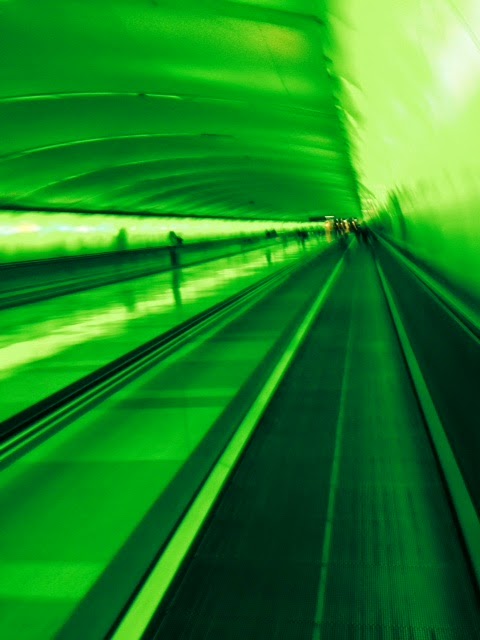 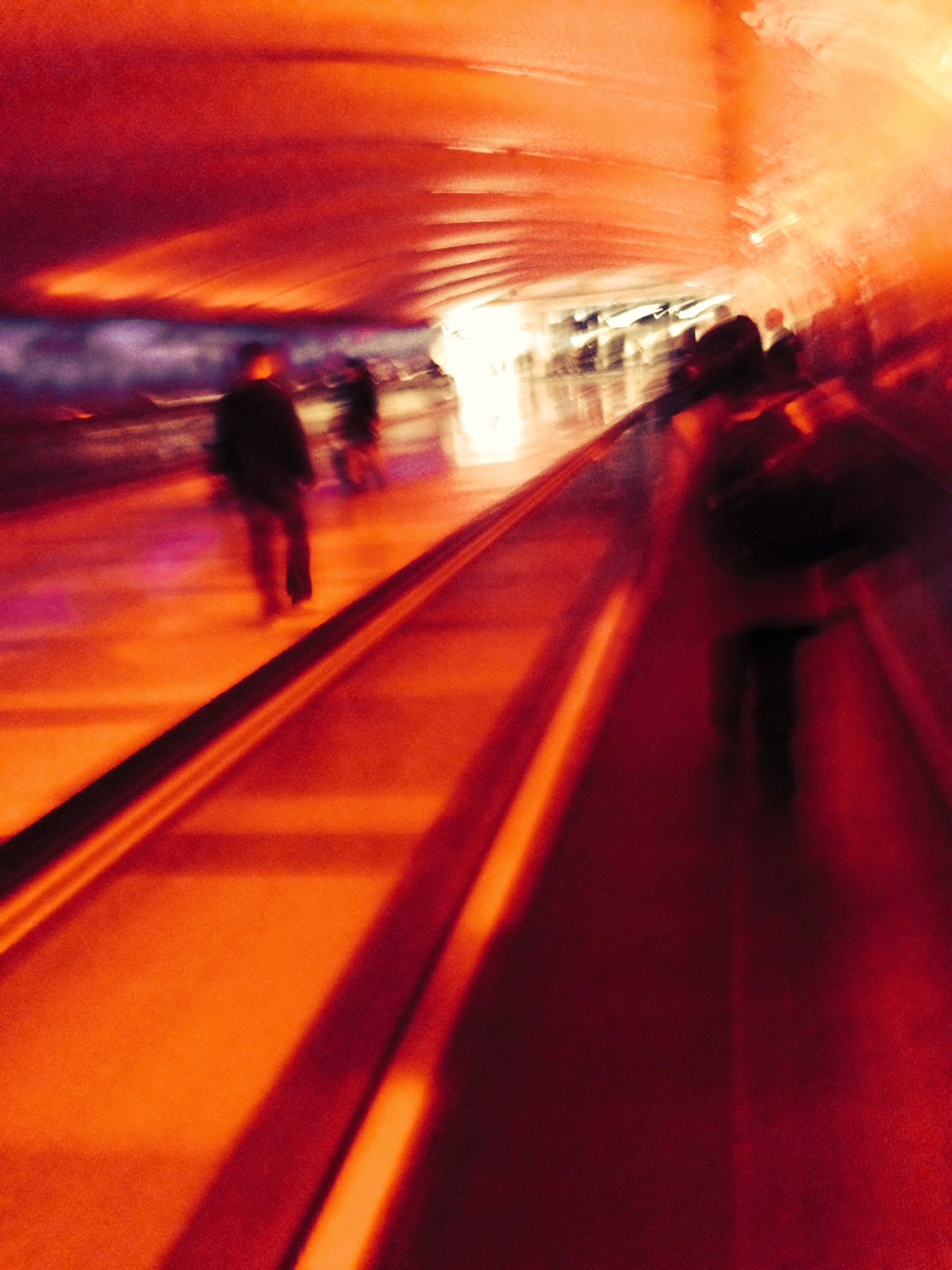 I was enthralled, to say the least.

I'm almost positive the airport tour guide's name was Ken, Kenny maybe. I'm better with faces than names, even though I try and work on that. I love that no two faces are the same; maybe in part that is why I like meeting new people so much.

I have a secret for you.

I've always been chasing this book. Looking to attach names with faces. I'm a dreamer soul, trying to get to the bottom of things, but especially when I was young I had lots of unanswerable questions. Like, why don't we learn the name of the person at the toll booth when we pass by him or her at every holiday trip?

There are different people there each time. It's hard to get to know the toll booth man. These answers weren't enough. I figured you can't always get a name, but you can try, and if not, you can at least give a Happy Thanksgiving.

I made my dad do this to a man at the toll booth once close to Thanksgiving because he was handing the money and I would have had to yell to the toll booth man. My dad wasn't as outspoken as me with strangers and didn't like the whole "Happy Thanksgiving" idea before Thanksgiving but I think it meant a lot to Henry. I'm pretty sure his name was Henry, but if not, the story has always kept him that way. I think I've named a lot of people over the years.

Also, here's another secret. I got a strange feeling sometimes when I traveled. I'd see people in rest stops or toll booths or even families in cars passing me by, and I had this sinking feeling I'd never get to meet them. I can't explain it, but the memory of that feeling has stuck with me even as an adult when I used to logic to tell me that I can't possibly meet all the people. Which is okay.

Maybe I can pay more attention though, and if so, the Kens or Kennys (sorry if I made this up) of this world might help us see the light.

I love these meetings because they remind me it's good for the world around me to stop for a minute and to take in the scenery, to forget all the rushing.

Perhaps a busy tunnel isn't the best place to have a picture taken, or is it? 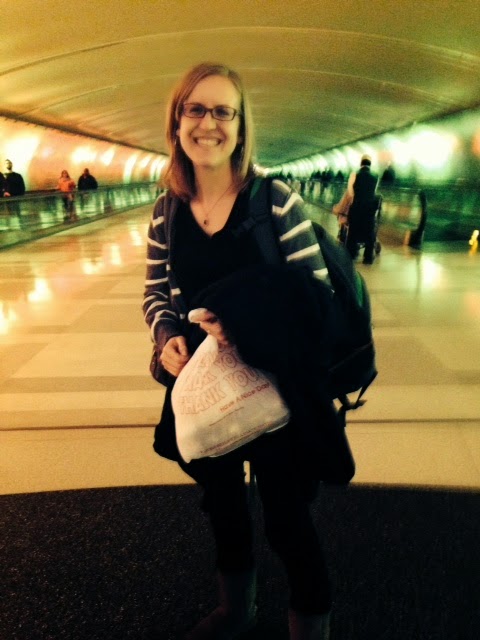 Thanks, Ken (ny)
Posted by Julie on an adventure at 8:46 PM No comments:

The power of a phone calendar (two guys on a train)

If you want to know the truth, I blame Paul and Matt for this blog.  And several other people who have helped along the way (I guess I should include you all who have known me for longer than a train ride...)

I had just left the conference that was so profound that my cousin, who I would meet up with in just a few short minutes in the city, said caused me to be 'all kinds of sentimental.' I was riding a real live train for the first time since my European excursion in 2005 so I was taking a video (of course) for my roommates-turned-lifelong-frieds from that adventure when I was interrupted by the two guys behind me.

They asked where I was going because of my seat buddy. The fifty pounds of luggage taking up space in the aisle. I didn't mind conversation even though my brain was like silly putty after the weekend's learnings. They were approachable, insurance salesmen (for mega churches,  they said) and seemed to enjoy showing me the sights as we went into the city. Of course, that included the ins and outs of the train. Fun fact: you can drink on the metra train. This was told to me by Paul. Or was it Matt? Either way, they were having fun, so as the train rolled on, so did our conversation.


We got to talking about their work and the conference at Willow Creek. Somehow, the subject of writing came up. Of course, I was hyped up on inspiration and bravery, so words about my aspiring book called 87 Coffees (which I'd been trying to write for almost a year now with little progress) came flooding out.

I told them it was about unplanned meetings with new faces in the crowd, 87 to be exact. Or at least that was the point on the horizon. I told them I meet people all the time through interesting encounters or connections so why not write about it? It's usually funny. This comment not to be directed at the situation in front of me where it seemed like the only people drinking on the train and making a racket were the ones talking to me. The guy across the way from us would be snoring soon, he was so fast asleep.

"When's it coming out?" they asked (I'm pretty sure they also agreed somewhere in there).

Paul pulled out his phone calendar and said he couldn't wait to check on this project. Everyone (except the man sleeping) started getting excited.

A year. From that day.  That's when he'd check on it. "A year's enough time to do this, right?

Was that a real question? I barely had anything written.

He put it in his phone. You know, like when you write down appointments and important matters?  You rarely look back until that day, so it felt permanent.

Matt did the same thing.

I'm not sure I answered their question.

I asked another question. What about the possibility it wasn't done, what if they didn't see anything after a year's time?

"We can just push the date back a year in our phones."

They quizzed me on their names again so I wouldn't forget (with all that time that might elapse, I didn't blame them).

Me forget them, though? They just told me they were going to make sure a stranger got her book written. Who knew all she needed was a little push, knowing there were people out there waiting for the story?

I believe them, too.

I need to practice believing in people everyday, and reminding myself of the light there.  Maybe that's what'll come out of this. A whole lot of light in what is often a dark world. We'll see.

Matt and Paul (and friends!)...I don't want to wait one or more years to write your stories. Here goes nothing.
Posted by Julie on an adventure at 7:02 PM 3 comments: